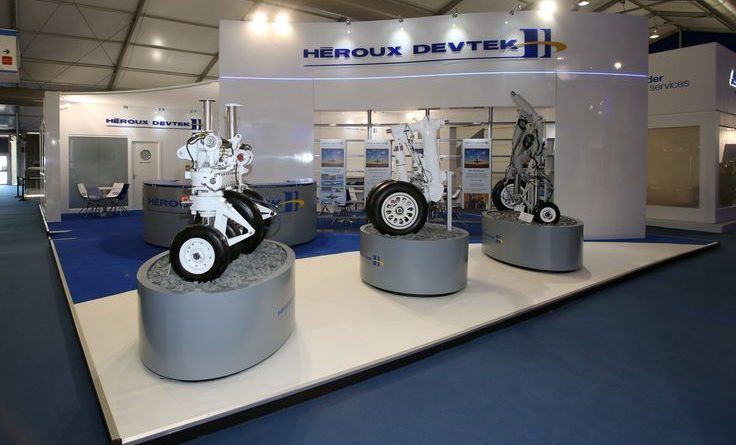 “First quarter results, including sales and profitability, were stable versus last year, in line with Management’s expectations. Sales in the commercial aerospace market increased, driven by Boeing 777 and 777X deliveries, while sales in the defence aerospace market decreased, mainly as a result of the ramp-down of the United States Air Force (“USAF”) contract, which will partially be offset by the new AAR contract starting to gradually ramp-up in the second quarter. We continued to generate strong free cash flow which allowed us to improve an already healthy financial position, with cash and cash equivalents of $99.0 million and a resulting net debt of $33.4 million, said Gilles Labbé, President and CEO of Héroux-Devtek.

“In the past few months, we continued to build a sustainable future. We completed the acquisition of Beaver and signed a number of new contracts with AAR Corporation, The Boeing Company and Lockheed Martin. These accomplishments are a testament to our leadership position in the landing gear market. In particular, the contract for the F/A-18E/F Super Hornet and EA-18G Growler attests to our growing relationship with Boeing and represents a significant win for our defence activities. As for our sales guidance, with the Beaver acquisition, we now expect mid-single digit sales growth for the year when compared to the previous year. Finally, with the CESA acquisition expected to close in the coming weeks, we are well positioned for our next expansion phase,” concluded Gilles Labbé.

FIRST QUARTER RESULTS
Consolidated sales reached $85.8 million, compared with $86.9 million in the first quarter of fiscal 2018. This slight decrease reflects lower sales to the defence aerospace market and a net negative impact of $2.5 million due to year-over-year fluctuations in the value of the Canadian currency versus foreign currencies, partially offset by higher sales to the commercial aerospace market, as detailed below.

Commercial sales increased 5.6% to $45.8 million, versus $43.3 million last year. The increase is mainly attributable to higher large commercial programs sales, mainly related to increased Boeing 777 and 777X deliveries. It is also due to higher business jet sales, primarily related to higher deliveries for the Embraer 450/500 program. These positive factors were partly offset by lower engineering activities.

Defence sales declined 8.1% from $43.5 million to $40.0 million. This variation is essentially due to the ramp-down of repair and overhaul (“R&O”) activities for the USAF and lower manufacturing requirements for certain civil customers. However, the new AAR Corporation contract will begin to mitigate a portion of this loss starting in the second quarter. These negative factors were partly offset by higher spare requirements for the U.S. Government.

Gross profit was $13.1 million, or 15.2% of sales, versus $12.9 million, or 14.9% of sales, last year. The increase mainly reflects higher absorption of costs related to the Boeing 777 program and improved production efficiencies. These factors were partly offset by unfavourable exchange rate fluctuations representing 0.3% of sales.

As at June 30, 2018, Héroux-Devtek’s funded (firm orders) backlog stood at $454 million, compared to $466 million three months earlier. The backlog does not include recently announced contracts.

SOLID CASH FLOWS AND HEALTHY FINANCIAL POSITION
Cash flows related to operating activities amounted to $8.5 million in the first quarter of fiscal 2019, versus $2.6 million last year. This variation reflects a more favourable variation in non-cash working capital items. Free cash flow in the first quarter of fiscal 2019 was $6.4 million, up significantly from $0.5 million last year. Given this free cash flow generation, Héroux-Devtek’s already healthy financial position improved further as at June 30, 2018, with cash and cash equivalents of $99.0 million, while total long-term debt was $132.4 million, including the current portion, but excluding net deferred financing costs. Long-term debt includes $55.3 million drawn against the Corporation’s authorized credit facility of $200 million. As a result, the net debt position was $33.4 million at the end of the first quarter, down from $38.8 million as at March 31, 2018. The net debt to adjusted EBITDA ratio stood at 0.6x versus 0.7x three months earlier.

GUIDANCE UPDATE
Management is updating its sales guidance for fiscal 2019 reflecting the Beaver acquisition. Management now expects sales growth in the mid-single digits versus fiscal 2018, up from stable sales in the previous guidance. Capital expenditures remain unchanged at $15 million.

Please see “Forward-Looking Statements” below and the Guidance section in the Corporation’s MD&A for the quarter ended June 30, 2018, for further details regarding the material assumptions underlying the foregoing guidance.