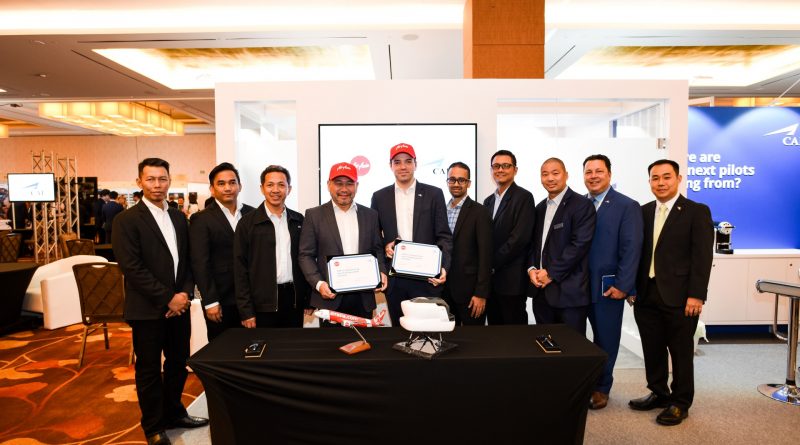 CAE announced today at the 2018 Asia Pacific Airline Training Symposium (APATS) that it has signed a new agreement with AirAsia to train more than 400 cadets in a competency-based Multi-Crew Pilot License (MPL) program to support the airline’s growth.

The selected cadets will begin training from the second half of 2018 at CAE Kuala Lumpur, CAE Melbourne and CAE Phoenix. Upon completion of their 18-month training program, the next generation of pilots will become AirAsia first officers.

AirAsia Group Chief Operations Officer Adrian Jenkins said, “CAE has been a tremendous partner since we first started the MPL program together eight years ago, not only launching an innovative program that sparked conversations in the industry, but continuously refining and adapting the training program. We are proud to select our long-standing partner once again to help us develop our 400+ future pilots.”

“Developing more than 400 future pilots that we will immerse in a professional training environment from day one is truly a testament to the success of the program we started together with our partner AirAsia eight years ago,” said Nick Leontidis, CAE Group President, Civil Aviation Training Solutions. “Today, we are proud to see graduates from this advanced program successfully flying as captains. This new agreement highlights our dedication to effectively train and prepare this next cadre of cadets as they begin their careers as professional pilots.”

In 2010, CAE introduced the MPL training program with AirAsia as a launch customer, complementing the offering in training paths and programs for cadets. The curriculum’s objective was to deliver a competency-based training program that provides airlines with pilots who are validated to safely and efficiently operate a modern multi-crew, multi-engine, turbine-powered commercial transport aircraft in all expected operational environments. Since 2010, more than 85 AirAsia cadets have trained through the MPL program. Since 2017, the first nine AirAsia-sponsored CAE MPL cadets have been flying as captains. CAE also offers training for pilots, cabin crew, maintenance engineers, technicians and ground services personnel on the Airbus A320 and A330 platforms for the airline. In addition, CAE launched its newest pilot training innovation, the CAE Rise™ training system, with AirAsia as its launch customer. AirAsia has been training its pilots with CAE Rise™ since May 2018.