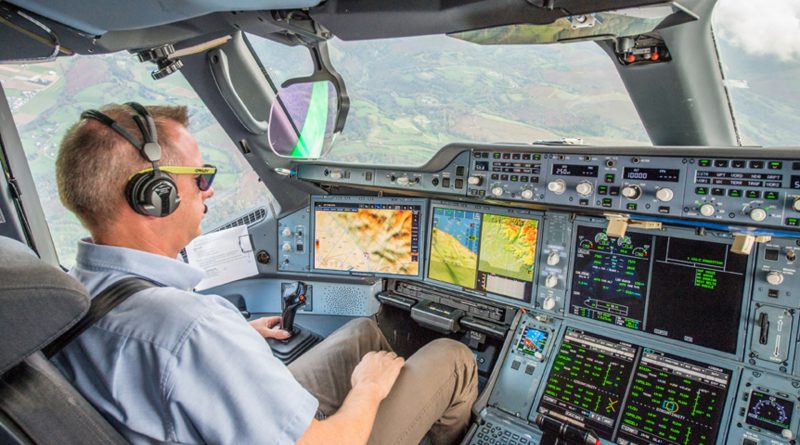 At the beginning of transatlantic flights, a pilot, a co-pilot, a flight engineer and a navigator were required. Then during the 50’s, the improvement of navigation instruments allowed the elimination of the navigator. In the early 80s, the arrival of computers on board aircraft eliminated the need of the flight engineer. The high level of security of modern airliners confirms that civil aviation has moved in the right direction. In 2022, it will be 40 years since two-pilot airliners exist and the next step in this evolution is to move to a single pilot.

At the aeronautical symposium held at the ÉNA on October 11th, we were able to discuss the development of the single pilot operation with Thales-Cortalx CEO Mr. Siegfried Usal. Cortalx is the research and technology center specializing in artificial intelligence at Thales in Montreal.

Mr. Usal explained to us that the information presented to pilots by the current avionics systems is of the fusion type, that is to say that one or more on-board computers collect the data to make a synthesis in order to present information on the situation in which the aircraft is. The performance of modern avionics systems has greatly contributed to the improvement of aviation safety.

However, a poor understanding by both crew members of the information available is the cause of a number of air disasters. The poor presentation of information is also a cause of accident. The next evolution in aviation safety is therefore to reduce the misunderstanding between the man and the machine in order to arrive at a better decision-making of the pilot. This is where artificial intelligence can intervene.

Mr. Usal explains that Thales’s avionics development philosophy has always put the human at the center of the decision-making chain and that the arrival of artificial intelligence will not change that. The artificial intelligence system allowing the operation of single-pilot airliners on which Thales-Cortalx works is therefore a system that will propose different scenarios to the pilot, but he will not make a decision.

During a failure for example, the system will be able to establish a diagnosis, provide different solution scenarios and to warn the pilot of the possible consequences of an action as well as problems that may arise. But the decision will always be taken by the pilot. The goal is to reduce the workload related to unexpected situations in order to release a cognitive reserve that will allow the pilot to make better decisions.

The system that is developed will be able to learn and adapt its way of doing things based on past results. Thus, the system may choose to present a series of important information in a specific order to improve the pilot’s understanding. This order can be modified according to the personality or the culture of the pilot.

The system Thales-Cortalx is working on is not an onboard system and is on the ground. The evolution of the data transmission capacity between an aircraft in flight and the ground has evolved sufficiently to allow interaction in real time. It is now possible to use several ground-based computers that are interconnected and capable of handling very large amounts of data without the size and weight constraints of onboard systems.

Mr. Usal mentioned that the system allowing single-pilot operation should be certified in 2025, remains to be seen if the airlines and their passengers will adopt it.