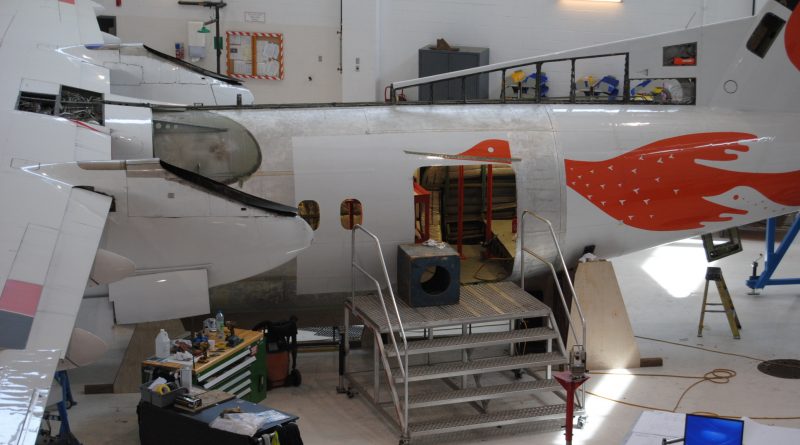 Not the usual airlines

Air Inuit is an airline that was created by Makivik Corporation and is wholly owned by the Inuit people of Nunavik. Although Air Inuit has its main base of operations in the south and serves a number of Québec’s cities, its primary mission is to provide safe air transportation services to 13,000 Nunavik residents living in 14 isolated villages.

Air Inuit faces some of the toughest operating conditions on the planet and in order to do so safely it must have an exemplary maintenance program. Air Inuit must provide the necessary personnel and equipment for air operations at the 14 airports it serves; Quebec’s Ministry of Transports owns the airport facilities and leases them to Air Inuit.

Some of the villages served by Air Inuit have barely more than 200 residents and rely exclusively on air transport for winter supplies.

A few years ago, Air Inuit retired a first Hawker HS748s (and the last one in March 2019) because RollsRoyce’s Dart engines were becoming too expensive to maintain. But needed a replacement aircraft with a full-size cargo door.

Although ATR offers the option of a full-size cargo door, its performance on short runway greatly limits its payload as some runway in Nunavik are only 3,500 feet long. With a payload of nearly 12,500 pounds on the small Nunavik runway, the DASH 8-300 became the best option provided it could be equipped with a cargo door.

After choosing the DASH 8-300, Air Inuit collaborated with Bombardier to obtain the necessary technical information about the aircraft. The first option would have been to install the cargo door at the front left of the fuselage a few feet to the rear of the cockpit. But between the current regular door and the cockpit, is the panel where all the radio instruments are installed. Cutting near this location would have required the movement of a large number of electrical cables and was too risky.

The second option was to cut out the right side of the front fuselage, but there was a great risk that when loading, the cargo pallets would hit the wall where the radio equipment is located and cause damage.

It is the third solution that has been chosen, namely on the left rear fuselage. The attached photos show where the opening will be cut for the new cargo door; from the rear, the cargo door will start at the same place as the current door and will extend to the second window visible on the photo.

Before beginning work on the aircraft, Air Inuit manufactured wooden jigs to deposit the fuselage to stabilize it. The interior finish was then removed, and then modifications of all kinds began.

To install the cargo door, it is necessary to cut precisely to install the frame of the door and the door itself. In order to maintain the rigidity of the fuselage during the critical period before the door was installed, a steel beam was installed and retained by three steel columns.

Once the opening is complete, the door and its frame will be integrated into the fuselage of the Dash 8-300. This door was manufactured by Rockwell Collins who will hold the STC once the work is completed on Dash-8 300. The opening of the cargo door will be 108 inches wide by 67 inches high.

At the same time, to facilitate unloading logistics at the smaller bases, Air Inuit is developing a system for unloading the pallets and transferring them on to a pick-up truck or a cube truck.

The longevity of DASH-8

The aircraft that Air Inuit will be able to modify can easily be used for 10 to 15 years. If necessary, Air Inuit will be able to extend the useful life of its Dash 8-300 from another 10 to 15 years thanks to an extended maintenance program.It should be noted that the maintenance of Air Inuit is beyond the usual standards allowing its fleet of Dash 8 to age well and remain in excellent condition.