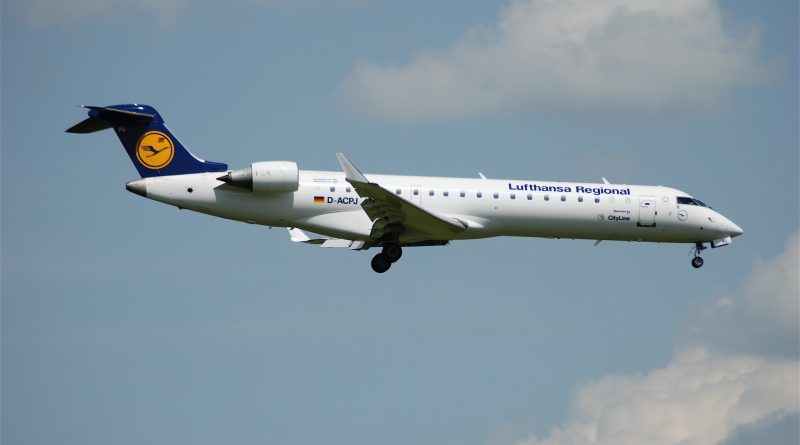 Now that the end of CRJ production is announced, here are the highlights of its history.

When Bombardier acquired Canadair in 1986, engineers had already discussed the possibility of extending the Challenger 600 fuselage to carry passengers on short commercial flights.

The idea appealed to Bombardier, which authorizes the development of this new aircraft program which then bore the name of Challenger 800. The name will eventually be replaced by Canadair Regional Jet and it is May 10, 1991 that the CRJ 100 made its inaugural flight at Dorval Airport. At that time, Bombardier only obtained three firm orders for the CRJ 100 which could carry 50 passengers. The first aircraft was delivered to Lufthansa in October 1992, marking the beginning of a formidable adventure.

Smaller and lighter than the MD 80s still in production, the Canadair Regional Jet was the first 50-seat jet that was profitable for the major airlines. The CRJ contributed helping the big American airlines to establish their hub and spore strategy. The operating cost savings generated by the hubs have allowed legacy airlines to compete against the rise of the lcc’s.

In the early 2000s, CRJs was selling like hot cakes; airlines where after Bombardier so they can place their orders as quickly as possible. In 2003 the production of the CRJ reached its peak with 214 aircraft delivered.

The CRJ aircraft program has given an extraordinary boost to the entire aerospace cluster in Quebec whose number of employees has increased from 30,000 to 40,000 during the 25 years of its production. The governments invested $ 375 million in this program, which enabled them to receive royalties totaling nearly $ 656 million.

The arrival of the competition

It was in 2004 that the Brazilian company Embraer delivered its first E-Jet E170 which will be followed by the E175 which is a direct competitor of the CRJ-900. Although weighing nearly the same weight as the E-175, the CRJ-900 consumes a little less fuel, but not enough to offset the lower price of the E-175.

The burden of the CRJ

Since the regional aircraft market has reached maturity and there is little growth, the value of used CRJs is below the residual value guaranteed by Bombardier. The lost is estimated at 600 million USD that Bombardier would have had to pay in the next years. This was a huge burden for an aircraft program that could no longer generate profits and was less and less easy to sell.

This is certainly not the ideal end, but it was time to make a decision.

Of the 1,600 CRJ jobs, 1,200 will be transferred to Mitsubishi. Of the remaining 400, about 250 are directly linked assembly and the remaining 150 are planning and management. Thanks to the ramping up of the A220, some of the workers will be transferred to Airbus while the others will be reassigned to the business aircraft division mainly on the Global 7500 program. Taking into account the many retirement that are communing up, it would be very surprising if there were any layoffs related to this transaction.

The conclusion of an agreement between Bombardier and Mitsubishi is the signal expected by the Quebec aerospace cluster to launch its charm operation with Mitsubishi. Here’s what Aéro Montréal president, Suanne Benoit, said about the deal: “The announcement of Mitsubishi Heavy Industries’ acquisition of the Canadair regional aircraft program is a tremendous opportunity for the aerospace cluster. After having attracted Airbus to our ecosystem last year, Mitsubishi is the sixth OEM to come to Greater Montreal, opening the door for our companies to the Asian market in very big growth on the aerospace scene. “

So this is the beginning of a new chapter