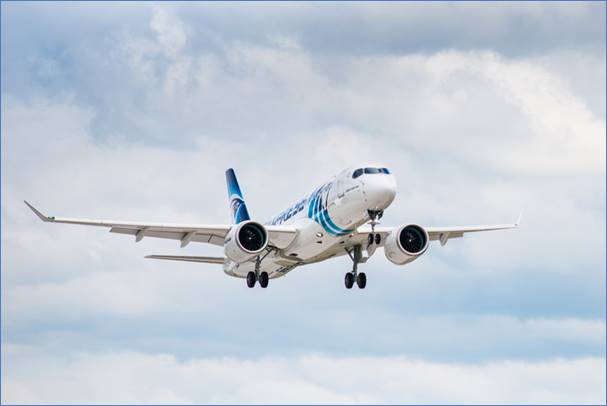 Our last update of the A220 aircraft program dates back to August 8th. Here is the latest information available about it.

Let’s go with a table of serial numbers on the Mirabel assembly line. *

Since the December 15th, 2018 update, 31 A220s have passed through the Mirabel assembly line. At the moment there is a balance between the number of aircraft produced and delivered, which has not always been the case. The interior finishing stage tended to be slower than the assembly stage.

Airbus delivered 31 A220s in 2019 (both aircraft delivered in early January are booked in 2018). With just over three months left, there are 14 planes to deliver to reach the goal of 45. If we rely on the pace of recent weeks, the goal will be met and exceeded.

The production rate of more than one aircraft per week is by far the highest reached by the A220 program. Is Airbus in the process of addressing A220 supply chain issues?

Airbus would have completed the evaluation of the damage caused by the flame retardant foam to the first American made A220. A corrosion inhibitor is added to this foam and the damage it causes is generally limited. It would seem that there was more fear than harm and that the aircraft will be recoverable. Airbus would have removed it from the assembly line to replace damaged electrical and avionics components. He will then be replaced on the line and the delays will be minimal.

Air Baltic took possession of the 20th and last A220-300 of its original order; the next aircraft delivered will be those of the second order of 30 placed in May 2018. In early 2019, the CEO of Air Baltic, Mr. Martin Gauss had explained that he wanted to launch a new LCC in Europe using A220-300’s. Mr. Gauss had explained that he would need another 30 A220-300, but he had to first secure financing before placing an order. It is possible that Air Baltic turns to AirLease Corporation, which ordered 50 A220-300 for its financing.

A second incident involving a SWISS A220-300 occurred last week. As in the previous incident, the rotor of the first low-pressure compressor fractured. In both cases it was a PW1524G.

The first low-pressure compressor is one of the moving parts that undergoes the least significant thermal stress and pressure on an engine. The last two incidents point to a manufacturing defect or a particular supplier.

As for the shafts corrosion problem, Pratt & Whitney should be able to make the fix over the next 12 months. In the meantime, the interval of inspections will need to be reduced.* (note that this information is to the best of our knowledge and may include minor errors)