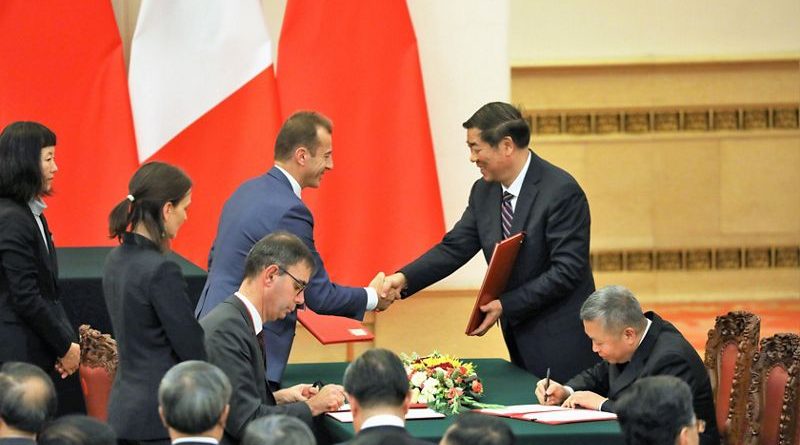 While the United States are engaged in a trade war with Europe and China, Boeing still wonders about the relevance of a replacement for the B767. Meanwhile, Airbus strengthens its partnership with China. The European giant is therefore favorably positioned in this fastest growing market.

Here is the press release from Airbus:

Airbus and China are strengthening their long-standing partnership as both sides commit to a further deepening and broadening of cooperation in the aviation industry.

A Memorandum of Understanding on the Further Development of Industrial Cooperation was signed in Beijing by He Lifeng, Chairman of the National Development and Reform Commission (NDRC) of China and Guillaume Faury, Airbus Chief Executive Officer in the presence of Chinese President Xi Jinping and visiting French President Emmanuel Macron.

According to the MoU, both sides have agreed to take practical and effective measures for new initiatives regarding both Airbus single-aisle and widebody aircraft. As part of Airbus’ objective to reach a global A320 Family production rate of 63 aircraft per month in 2021, the Airbus Tianjin A320 Family Final Assembly Line (FAL Asia) remains on track to ramp up its production to six aircraft per month by the end of 2019, which is a 50% increase compared to its original design. A350 XWB capabilities will be extended into the Airbus Tianjin wide-body Completion and Delivery Centre (C&DC) from the second half of 2020. The C&DC is scheduled to deliver its first A350 aircraft by 2021 from Tianjin.

“We attach great importance to our long-term strategic partnership with China and its aviation industry,” said Airbus CEO Guillaume Faury. “Airbus is committed to serving this growth sector with the diverse portfolio it has to offer and we are committed to working with our Chinese partners to shape the future of the industry.”

The potential of China’s aviation market is huge: while China domestic is set to become the world’s largest market, international traffic to and from China has nearly doubled over the last 10 years. According to the Airbus Global Market Forecast, China is expected to require some 7,560 new aircraft over the next 20 years.

In both Airbus’ single-aisle and widebody aircraft programmes, cooperation is well established. In single-aisle, the FAL Asia has been successfully operating for over a decade since its inauguration in September 2008. To date, 450 A320 Family aircraft have been delivered from Tianjin to Airbus’ Chinese and Asian customers since.

In twin-aisle aircraft, the first Airbus’ widebody centre outside Europe, the C&DC – inaugurated in September 2017 – has successfully performed A330 aircraft completion activities including cabin installation, aircraft painting and production flight test, as well as customer acceptance and aircraft delivery. The A350 XWB, one of the most successful widebodied aircraft ever, has garnered 913 firm orders from 51 customers worldwide.