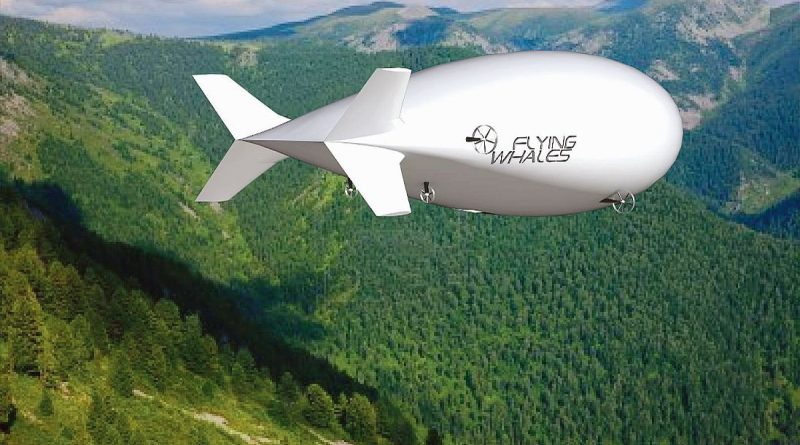 The company relies on the financial support of several public bodies and companies. The National Forestry Office (ONF), the BPI, the National Aerospace Research Studies Office (ONERA), Safran, AVIC and now the Government of Quebec. The percentage of share capital held by the various shareholders is not known. We do know, however, that BPI has invested 25 million euros in the company.

The idea of ​​building an airship for the transport of goods came from the ONF, which is looking for a solution to be able to extract wood in inaccessible areas such as the French Alps. LCA60T stands for large airship capacity 60 tonnes.

The airship will be 150 meters long by 43 meters wide with a cargo bay of 80 meters long. It will also have its one winchs on board. The goal is to be able to load and unload while hovering without the support of ground infrastructure. The LCA60T will use helium to make it lighter than air while it will use hybrid propulsion. Flying Whales will use composite for the structure and its assembly will use stereolithography. This method will require more development for object the size of the LCA60T.

With the LCA60T, the cost of transporting per tonne will be higher than transporting by truck where there are roads. But it will consume less energy and be eco-responsible. Where there is no transport infrastructure (road, port and airport), the airship will be more economical when you take into account the cost of building this infrastructure. The National forest board of France will be the first customer of the LAC60T.

Quebec will invest $ 30 million in all in this project, $ 22 million in the share capital of Flying Whales and $ 8 million in that of the Quebec subsidiary. The company will created a design office as a first step. The construction of an assembly plant for the North American market is scheduled for 2021-22.

The airship that Flying Whales offers is a developing technology and there is no guarantee of its success. It is still a disruptive technology that offers great possibilities if it comes to fruition. In this sense, Quebec’s investment must be seen as an investment in research and development of an alternative and more ecological method of transport. The use of stereolithography is promising; seeing local engineers working there could have significant long-term repercussions for Quebec’s aerospace industry.

The start-up announced yesterday the choice of its first industrial site. The company as selected the town of Laruscade in North Gironde. Flying Whales hopes to begin construction of buildings on the 50 hectare site in the second half of 2021. Goudchaux Architectes & Associés will be in charge of the design of the two hangars. They will be 250 meters long by 60 meters. Production could start in 2023 if the project does not encounter major obstacles.