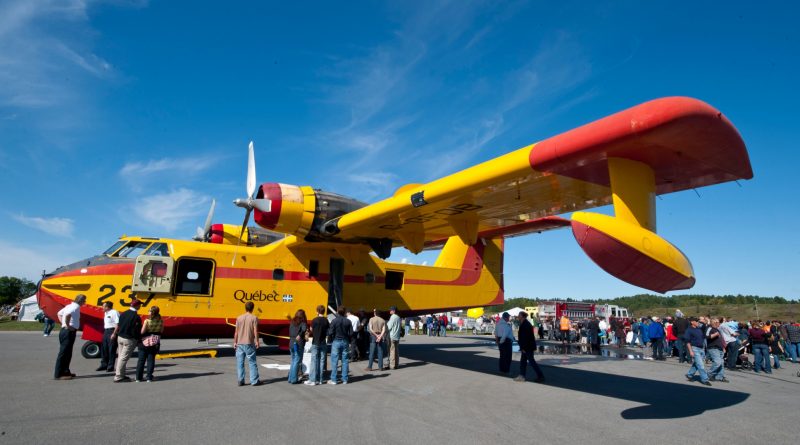 The CL215 and its successor, the CL-415, are icons of Quebec’s aerospace industry that have made a great contribution to the name of Canadair throughout the world. But few people remember the problems that the CL-215 experienced during its creation.

It was in September 1962 that Canadair approached the director of the government air service, Paul Gagnon, to present him with a plan for a twin-engine turbine bush plane. Mr. Gagnon responds to Canadair that he does not really need a bush device, but is looking for a replacement plane for the Canso. Although the government has just acquired and modified them for the fight against forest fires, the Canso aircrafts date back from the Second World War and Mr. Gagnon is aware that he must already consider their replacement.

Following these discussions, Canadair proposed in 1963 a first version of a non-amphibious water bomber, the CL-204. To launch the project, Canadair needed 30 firm orders and had to fund the development, construction and certification of both prototypes. It was therefore Mr. Gagnon who began looking for funding for the prototypes; he was also responsible for convincing the Quebec government to purchase 20 planes. Through existing programs, the Canadian government agreed in 1965 to finance 50% of the cost of acquiring the aircraft and 50% of the development costs.

Meanwhile, Canadair had realized that if the water bomber was not amphibious it would interest very few buyers, while an amphibious version would have a potential of 130 firm orders. The CL-204 project was therefore replaced by the CL-215 in 1964. Once the prototype funding was settled, one or more customers had to be found for another 10 copies for the CL-215 program to come into existence. Here again, it is Paul Gagnon’s contacts with the French civil protection that will have found the client for the ten more planes. However, the French order was conditional on an order of 7 Falcon Mystère-20 aircraft by the Canadian government.

The negotiations led finally to the conclusion of a firm order of 20 CL-215 aircraft from the Quebec government on May 19, 1966, followed a few days later by a firm order of 10 CL-215 by the French government. The CL-215 was launched.

In part II :  Mistakes and savings that sow discord.