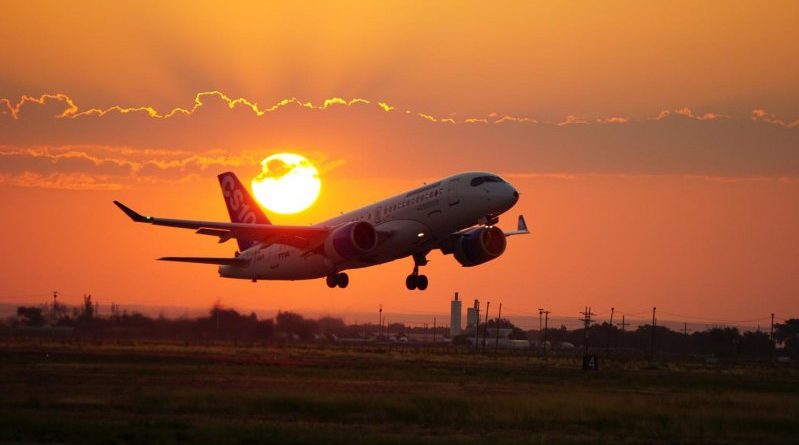 On June 21, Bombardier Commercial Aircraft Media Relations took us on a tour of the C Series assembly line for the last time; it will be the turn of Airbus media relations to welcome us to this section of the Mirabel plant next time.

The CS100 serial number 50021 and the CS300 serial number 55047 were in the process of attaching the wings to the fuselage, which means that Bombardier will have assembled about 68 C Series fuselages before handing over to Airbus. Of these 7 were used for flight tests, 1 for static tests and 35 were delivered to customers. This leaves 25 fuselage in inventory at various stages of production. It is not surprising to see C Series everywhere in Bombardier hangars in Mirabel and that some FTVs hang out in Wichita or Dorval. In order to unclog the interior finish section it is expected that Avianor completes the assembly of 2 or 3 C Series a year and only for a few years.

The takeover of the C Series by Airbus coincides with the end of the post-certification test flights that have led in the last two years to seek additional certifications of steep approaches, ETOPS 120 and category III approaches.

As we mentioned last Tuesday, there will be a day of celebration in Mirabel on July 4th on the C Series side. The purpose of this day is to allow employees of the C Series Limited Partnership to get to know the new management team.

While the C Series will come under Airbus control in a few hours, we would like to congratulate all the men and women who have worked closely or remotely on the C Series. You helped develop the best available aircraft right now. While the commercial success of the C Series has been the subject of much speculation and doubt over the past four years, no one has been able to question its extraordinary qualities. The C Series is a fine example of the level of excellence and maturity achieved by the Quebec aerospace cluster. On July 3rd, employees of the C Series Limited Partnership and suppliers will continue to work with pride on the best aircraft.

Those who know the history of the Avro Arrow know that the shutdown of its production in February 1959 dealt a severe blow to the Canadian aerospace industry which took nearly 25 years to recover. It is for this reason that we believe that take over of the C Series by Airbus is not a tragedy since it ensures its survival. Airbus’ huge sales and marketing strength will bring to the C Series what it lacks most.