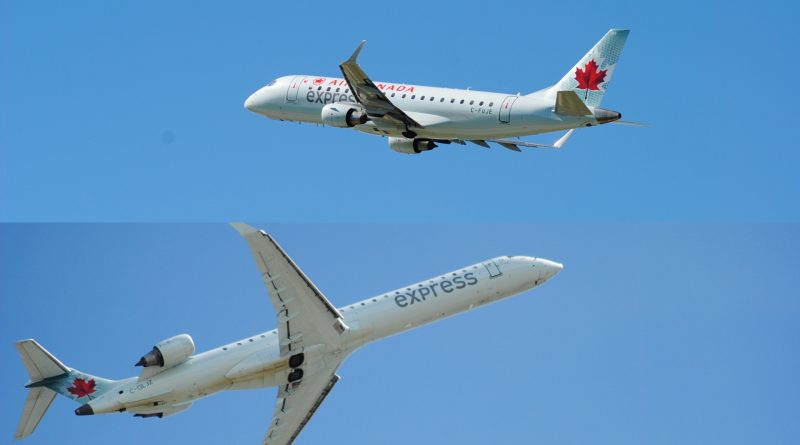 As of March 31, 2013, the Brazilian manufacturer Embraer had obtained 245 firm orders for the E-175, including 159 in US soil against 86 for the rest of the planet. Back then, the United States accounted for 65% of sales of this variant of E-Jet. For its part, the Canadian air framer Bombardier had recorded a total of 314 firm orders for the CRJ-900, which is the equivalent of the E-175 in terms of passenger capacity. With 215 firm orders, the United States accounted for 68% of CRJ-900 sales at the time, compared to 32% in the rest of the world.

In the early 2010s, the rumor that the US regional aircraft scope clause was going to be raised up was circulating in the airline industry and regional aircraft manufacturers. Based on this rumor, Embraer did not hesitate to also launch re-engines version the E-175 the E2-175 with the E2-190 end 195, even if its new maximum takeoff weight exceeded the scope clause at that time.

In 2013, seeing that Bombardier was struggling with the development of three aircraft programs, the Learjet-85, the Global 7000, and the C Series, Embraer wanted to seize this opportunity to wage war on the CRJ-900 because it knew that Bombardier’s finances would be put to the test in the years to come. So she tried to get all orders from American companies, regardless of the price. During this period, Embraer won 355 orders for the E-175 in the United States against only 29 for the CRJ. Embraer has captured more than 90% of the shares of this dominant market, winning this battle in a striking way. But this victory loses some of its luster when we look at the rest of the market; Embraer has failed to sell a single E-175 outside the US since 2013 while Bombardier has sold 111 CRJ-900 elsewhere in the world. In total for this period Embraer still managed to control 73% of the shares of the global regional aircraft market.

Embraer’s strategy made sense to the extent that the scope clause would be revised upwards, as the ultimate goal was to capture this market before Bombardier could turn around and re-engines the CRJ-900. But the final result of Embraer’s battle with the CRJ was very bad for E2-175 as it failed to land a single order outside the United States. As the limitation clause remained unchanged, Embraer was obliged to postpone the entry into service of E2-175 until 2021, again with the expectation that the limitation clause would be amended in the meantime. In fact, the 100 aircraft order from Skywest in 2013 is the only one that Embraer as received for E2-175.

If the victory of the E-175 against the CRJ-900 in the US market is undoubted, it has seriously put in danger the E2-175 that could be ended even before a single aircraft is being produced. Meanwhile, the latest improvements Bombardier’s maid to the CRJ-900 allows it to regain market share while preserving its profit margin. Far from being eliminated, the CRJ-900 is still alive. The choice of Embraer to launch a price war and to bet on hypothetical changes to the scope clause was the wrong strategy.