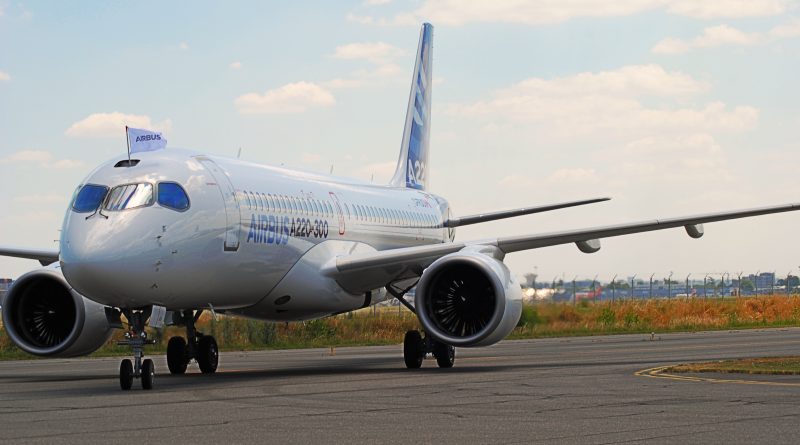 The unveiling of the new name of the C series as well as the order of JetBlue last Tuesday signals all sorts of speculation about Airbus intentions about the A220’s place in the European giant’s aircraft products. With the help of facts, we want to correct some of the perceptions that are circulating right now.

Airbus chose July 10 as the date of disclosure of the name of the A220 for very simple practical reasons; every year, in the days leading up to Farnborough or Le Bourget, Airbus is holding a meeting in Toulouse with all the marketing and sales staff to make some adjustment for the most important air show of the year. As the A220 is an entirely new aircraft within the Airbus group, it was important to present it and give the opportunity to the sales team to see its interior.

Airbus has estimated that it was impossible to paint an A220 and bring it to Toulouse a week before Farnborough without the new name or the new livery being disclosed by bloggers or journalists. Moreover, as a reader of this site, you know very well that this is the kind of information that we would not have hesitated to publish if we had it in advance. By painting the first A220 in England at an independent site less than two hours from Toulouse and just days before presenting it to journalists, Airbus minimized the risk of leak.

As for the timing of the disclosure of the 60 A220 order by JetBlue, the reason is related to JetBlue’s internal policies. It has  non-disclosure rule within the 14 days preceding the publication of its financial results; The company will release its financial results for the second quarter of 2018 on July 24, a date chosen more than six months ago. So after the signing of the contract between JetBlue and the Limited Partnership, the latest date for announcing the order was July 10, otherwise it would have had to be postponed until after July 24th, well after Farnborough.

As we can see, the choice of July 10 to reveal the new name of the A220 and the order of JetBlue was for practical reasons and respect of the rules of ethics and has nothing to do with certain theories where Airbus would have feared that the A220 would overshadow its other aircraft programs in Farnborough.

The only strategy that Airbus has with the A220 is to sell as much and as quickly as possible.