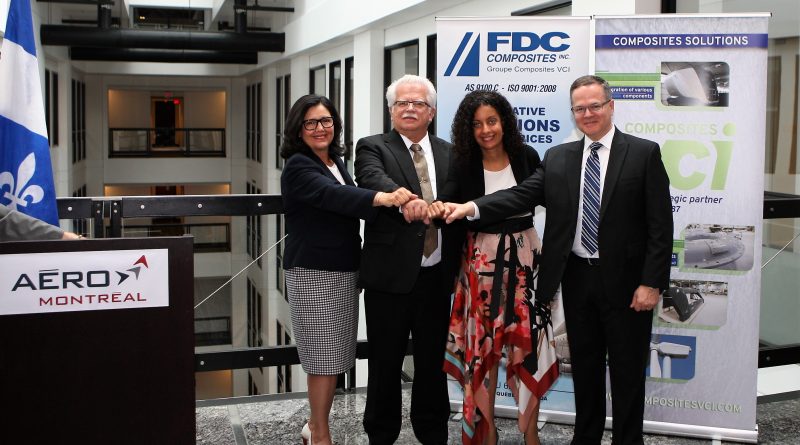 It was during a brief ceremony that the Composite Group VCI and FDC Composites companies formalized their marriage. The Deputy Prime Minister of Quebec and Minister of the Economy, Science and Innovation and Minister responsible for the Digital Agenda, Mrs. Dominique Anglade has served as the celebrant for this union. Aéro Montréal’s Executive Director, Suzanne Benoit, served as a witness for the two entrepreneurs.

As indicated in our introduction, the strategic alliance between VCI Composites Group and FDC Composites looks like a marriage in many ways, since both companies have a business relationship since 2011. Over time, the Group’s CEO Composites VCI, Mr. Serge Le Goff, as well as the CEO of FDC Composites, Mr. Jacques Cabana, were able to note that they shared the same values ​​and the same vision of the market and how to develop it.

For Mr. Cabana, who is in his first experience in consolidation, the decision was not very difficult to make since he knew very well the company with which he has just allied himself. Mr. Cabana explained that OEMs are looking for suppliers who can manufacture and integrate complete and complex assemblies and systems, rather than having to negotiate with a different supplier for each part and subassembly. This alliance allows the new company, which now has close to 300 employees in three plants, including one in Brazil, to provide customers with what they are asking for. With the arrival of Airbus in Canada, Cabana sees great business opportunities in the civil aviation sector for the new company.

Mr. Cabana and Mr. Le Goff think that there is still room for consolidation with other companies in the Quebec aerospace cluster and say that this is only the beginning.