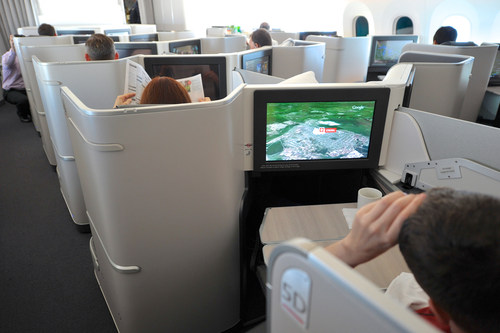 Air Canada is the preferred airline for domestic travel for 92 per cent of frequent business travellers, according to the Ipsos Reid 2018 Canadian Business Traveller Survey. The national study determined Air Canada is the only Canadian airline to see a consistent increase in preference and in usage for the past five years.  Additionally, readers of leading frequent business traveller magazine Business Traveler have named Air Canada “Best North American Airline for International Travel”, as well as “Best North American Airline for Inflight Experience”, solidifying Air Canada’s position as the preferred airline for business travel.

“This year’s Ipsos Reid Canadian Business Traveller Survey confirms Air Canada is the preferred airline of Canadians who fly most often and that its lead over other carriers continues to widen. The 2018 results revealed the broadest margin of frequent traveller preference for Air Canada versus our domestic competitors since 2014, and we are especially pleased that this positive trend is seen in all regions of Canada,” said Lucie Guillemette, Executive Vice President and Chief Commercial Officer at Air Canada.

“Year-over-year increases in key ratings by business travellers reflect our business customers’ appreciation of our strong global network, schedule, loyalty programs and focus on customer service. Together with the results from Business Traveler USA, this further indicates that Air Canada is successfully executing its global strategies, which include introducing a new, industry-leading loyalty program in 2020. On behalf of our 30,000 employees worldwide, I thank our customers for choosing Air Canada in growing numbers, and we look forward to welcoming them onboard North America’s only international four-star airline as affirmed by global air transport rating organization Skytrax, for their next flight,” concluded Lucie.

The 27th annual Canadian Business Traveller Survey is an online survey conducted independently by Ipsos Reid, based on business travellers who took a minimum of six round trip flights for business in the past 12 months. The results showed consistently strong ratings in customer preference for Air Canada’s frequent flyer reward program, convenient flight schedule and customer service. Among other things, the survey of frequent business travellers found:

Business Traveler USA invites its readers annually to select the top travel providers across the globe, noting that business travellers are always the first to identify the best products and services essential to success and return on the traveller’s investment.

More information about Air Canada’s array of services for business travel ranging from small to medium to large corporations is at: www.aircanada.com/businesstravel