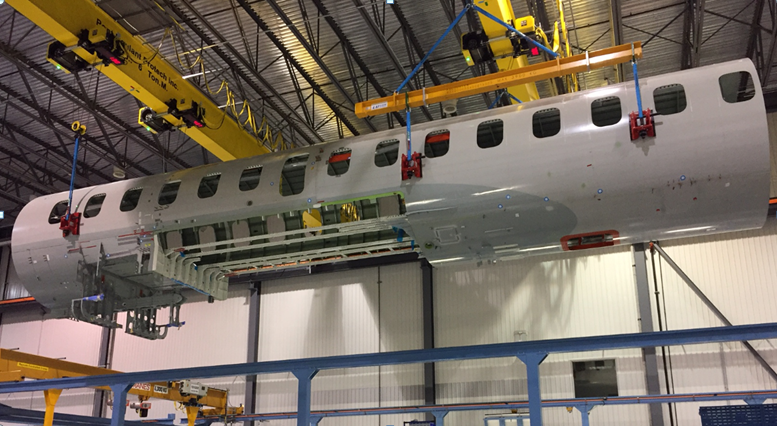 STELIA Aerospace is a wholly-owned subsidiary of Airbus, which was created in 2015 with the merger of Sogerma and Aerolia. It specializes in the manufacture of aerostructures, first class seats, business class and economy premium as well as pilot seats. The company inherited the Aerolia’s Global 7500 and 8000 fuselages manufacturing and assembly mandate.

In 2015, construction began on the Mirabel plant, which has nearly 250 employees, of which about 70 are directly assigned to the fuselage assembly, while the other employees work in support functions such as engineering. The first four fuselages for test aircraft (FTV) were assembled in Toulouse; Subsequently, the production equipment and the assembly jigs were dismantled and sent to Mirabel for installation. FTV5 is therefore the first Global 7500 whose fuselage was assembled at Mirabel.

The Mirabel plant is 74,000 square feet in size, U-shaped and has a production capacity of 77 fuselages per year; if necessary, the area of ​​the plant could be multiplied by five. The plant has two manufacturing lines of four work stations each, a paint shop for primer application and two overflow stations. At the time of our visit, STELIA was about to ship to Bombardier the Global 7500 fuselage with serial number 42 while number 52 was beginning to assemble.

In the first section of the U, STELIA assembles the structural elements that come from several internal and external suppliers. The first step is to assemble two fuselage sections of 7 meters each and then join them in a single section of 14 meters. For now, the riveting is entirely manual; the automation of this process will begin in 2020 while the production rate will be increased to 40 fuselages per year.

The fuselages are then transferred to the second station where are installed some 3,000 Bracket for electrical and hydraulic systems as well as anchors used to install furniture for interior finishing. In order to guarantee the precision of the assembly, STELIA uses a laser measurement system and accurately analyzes the position of 1200 verification points with a tolerance of 25 thousandths of an inch; on a fuselage 14 meters long (45 feet 11 inches) is very little. To avoid distortions caused by temperature changes, the plant is maintained at 20 degrees Celsius 365 days a year. At this stage, a report is produced on the positioning of each of the installed supports and Bombardier is then able to see if additional adjustments will be necessary when assembling at Downsview or at the Laurent Beaudoin finishing center in Montreal.

The fuselages then pass through the paint chamber, where a primer is applied to protect the structure. Then comes the installation of hydraulic conduits and electrical wiring in the fuselage. The final step is to perform a complete check of all installed systems to ensure they are working properly. From the start of manufacturing the first component of a Global 7500 fuselage to delivery at the Downsview plant in Toronto, it has been almost a year.

When they arrive at the Bombardier Business Aircraft Global 7500 assembly line in Downsview, the fuselages only need to be connected to the cockpit and the aft section. The same goes for electrical and hydraulic systems.

The director of operations at the Mirabel STELIA plant, Mr. Jean-Pierre Cousserans, declares that the team is looking for a new mandate in the North American market.