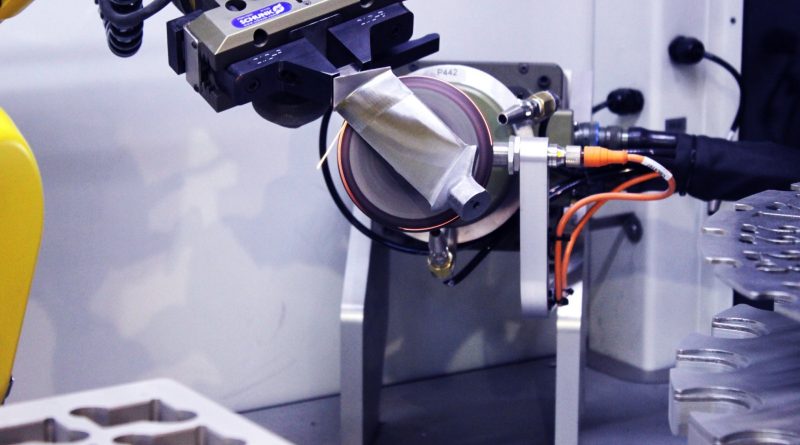 AV&R is an SME based in the Montreal area with about 100 employees spread over two sites. It works in the highly specialized field of robotic finishing and robotic visual inspection of turbine parts for both aeronautics and the energy sector. It has been active in the gas turbine industry for the past 15 years. AV&R deals primarily with major engine manufacturers: CFM, GE, Pratt & Whitney, Rolls Royce and Safran.

Blades, compressors and turbines have the role of sucking in the air, circulating it in the engines, compressing it and ejecting it.

They are equipped with fins having the same function as a propeller blade. The blades of the blower and the blades of the compressors are located in the front part of the engine. These blades can be molded in one piece or assembled from several machined parts. The precision of blade profiling and polishing is very important because it affects the operation and performance of the engine. In the hot section of the engine, the turbine blades capture the thrust generated by theignition

of the air and the kerosene compressed by the compressor zone. The aerodynamics of this section is also extremely critical.

What’s more, in both sections, manufacturers must inspect the blades manually for surface defects. This tedious and regulated work is not always easy and interesting for humans. This is where AV&R solutions come in to solve manufacturers’ problems for both new parts and used parts that need to be refurbished.

The robotic finishing solutions that AV&R offers its customers are adaptive, which means the robot is able to modify and adapt its program from one piece to the other. Thus, when an AV&R robot grabs a part, it measures it in different places to determine its positioning and its exact dimensions. The robot can proceed with the deburring, profiling and polishing that it adapts according

to the state of the part. The result is a very high precision which stabilizes the process. It also reduces the number of rejections due to non-compliance, enabling manufacturers to gain substantial savings.

AV&R is not a robot manufacturer but an integrator that buys the various components according to the specific needs of its customers to assemble them in its plant. The added value of its robots comes from the software it has been developing for over

25 years and from its knowledge of finishing processes.

Thanks to its algorithms and its capacity to adapt them according to customer needs, AV&R has become the best in its field.

All AV&R robots are assembled and calibrated in its plant before being shipped to the customer, who receives a plug-in solution.

A culture of quality

At AV&R, quality is more than concepts that are applied according to pre-established methods, it’sa way of being. This is reflected in all facets of the business, including human resource management that is geared toward the well-being of employees. For several years, for example, a break room and varied entertainment have been made available toemployees.

The attention to detail is also reflected in the choice of premises that the company occupies. Its pyramid-shape allows the vast majority of rooms to be flooded with abundant natural day light throughout the year, creating a pleasant workingatmosphere.

Now that it has mastered its area of expertise, AV&R is ready to step outside of its comfort zone to meet new challenges. It is exploring the possibility of adapting its technology for very large pieces such as wing sections that can reach tens of feet in length.

AV&R is looking for a partner to increase its presence in new markets in Asia, Europe and the United States. The goal is to share its teams as well as technologies in order togrow

in their respective markets. AV&R’s ability to innovate and meet the needs of its customers has made it a supplier of choice for aircraft engine manufacturers. The company will be an excellent partner for a company wanting to increase its presence in North America and benefit from its expertise in the adaptive finishing of