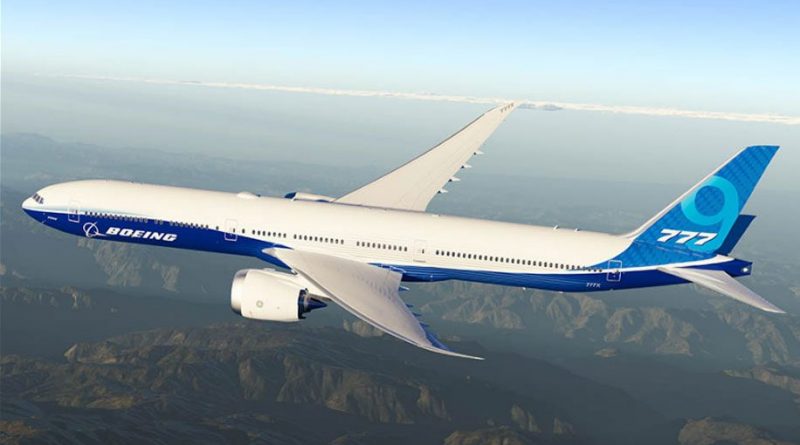 It was yesterday that CAE held the annual meeting of its shareholders. After the meeting with the media, I received an invitation for a simulator demonstration. Ho surprise! We boarded the first B777X simulator. Usually, media demonstrations do not last more than 5 minutes per journalist. But since I was the only one wanting to take control, I got 20 minutes of it.

The simulator is still in development and it included several small “bugs”. But, its development is advanced enough to give a good representation of the behavior of the B777X. The simulator we tried is the B777-9 for Lufthansa.

The first thing that surprises is the rigidity of the control of the nose wheel. It requires the application of good force to steer the aircraft to the ground. In order to avoid having changes during the demonstration, the aircraft was configured at 580,000 pounds. It’s just below the maximum landing weight. The first 5 minutes were spent on a very short briefing on the B777X.

The switch that unfolds the wingtips is located on the ceiling’s center console. The pivoting switch is spring loaded and returns it to the folded position as soon as it is touched. On the ground, nothing prevents the aircraft from taking off if the wingtips are not unfolded. But visual and audible alarms are almost impossible to miss. Once in flight, the wingtips cannot be folded. Therefore, the switch can be set to folded position before landing, the mechanism will activate when the speed will go below 75 knots. In fact, it is much easier to forget to unfold the wings than to do the opposite.

Note that the aircraft was in manual mode throughout the flight and that there was slight turbulence. I set maximum power for the takeoff run. From memory the VR was between 180 knots and 200 knots. Once in flight, the power was reduced to 85% for the climb. At 3,000 feet, we simulated an engine failure: the aircraft continued to climb up to 4,000 feet without having to push the functional engine to full power again. To tell the truth, controlling the aircraft on a single engine seemed incredibly easy.

The landing was done with both engines and a crosswind component of 15 knots. Again the maneuver did not pose great difficulty, except when touching the ground; I had kept the nose of the plane in the wind rather than lining it up on the runway. The first seconds on the runway needed to be alert with the pedestal. We felt the strong lateral movement.

The B777X is a very maneuverable plane to fly, it goes precisely where it is asked to go without grumbling. Despite the presence of fly by wire controls, we feel the mass of the aircraft and its inertia. Yet, they are not heavy but rather easy to use.

A real assessment would take a good hour and CAE people know where to find me 🙂 .