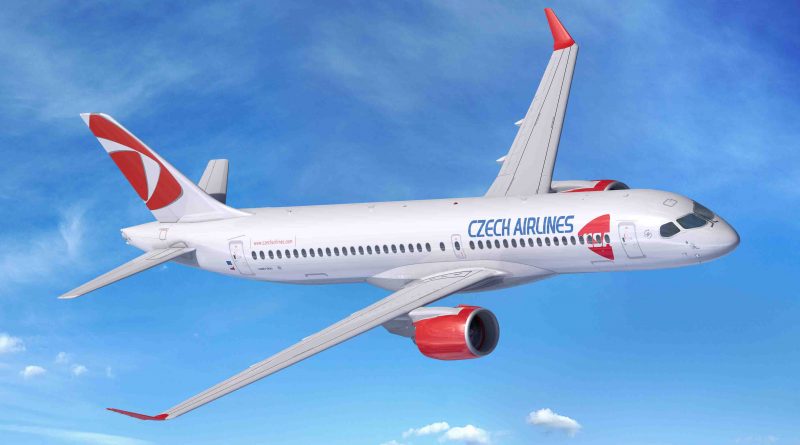 Toulouse, 23 October 2019 – Czech Airlines has ordered four Airbus A220-300 aircraft and opted for additional range by upsizing a previous order for three A320neo to A321XLR.

The two fuel-efficient aircraft types will complement Czech Airlines’ existing fleet of six A319 and one A330-300, and allow it to continue extending its network to reach more markets. The airline will also benefit from the commonality of Airbus Family aircraft. The A220-300 will be fitted with 149 seats, while the A321XLR will cater for top comfort in a two-class layout with 195 seats.

“The A220 and A321XLR fit well with our long-term business strategy in terms of network expansion. These aircraft will definitely give Czech Airlines a competitive advantage, and will increase the capacity of our regular flights. I believe that this step will be appreciated by our passengers, as the aircraft offer best in class comfort even during long haul flights thanks to a brand new cabin configuration,” said Petr Kudela, Chairman of the Board of Czech Airlines.

“What a winning combination for Czech Airlines! The A220 has proved to be a strong performer in Europe with its high daily utilisation being a testament to its versatility,” said Christian Scherer, Airbus Chief Commercial Officer. “The A321XLR has the longest range of our A320 Family. Passengers can now fly further without compromising on comfort, whilst Czech Airlines benefits from remarkably lower fuel consumption as it expands its network.”

The A220 is the only aircraft purpose-built for the 100-150 seat market; it delivers unbeatable fuel efficiency and wide-body passenger comfort in a single-aisle aircraft. The A220 brings together state-of-the-art aerodynamics, advanced materials and Pratt & Whitney’s latest-generation PW1500G geared turbofan engines to offer at least a 20 percent lower fuel burn per seat compared to previous generation aircraft, along with significantly lower emissions and a reduced noise footprint. The A220 offers the performance of larger single-aisle aircraft. The A220 had an order book of over 525 aircraft at the end of September 2019.

The A321XLR is the next evolutionary step from the A321LR which responds to market needs for even more range and payload, creating more value for the airlines. From 2023, it will deliver an unprecedented Xtra Long Range of up to 4,700nm – with 30 percent lower fuel burn per seat compared with previous generation competitor aircraft. To date, the A320neo Family has captured more than 6,650 orders from nearly 110 customers.