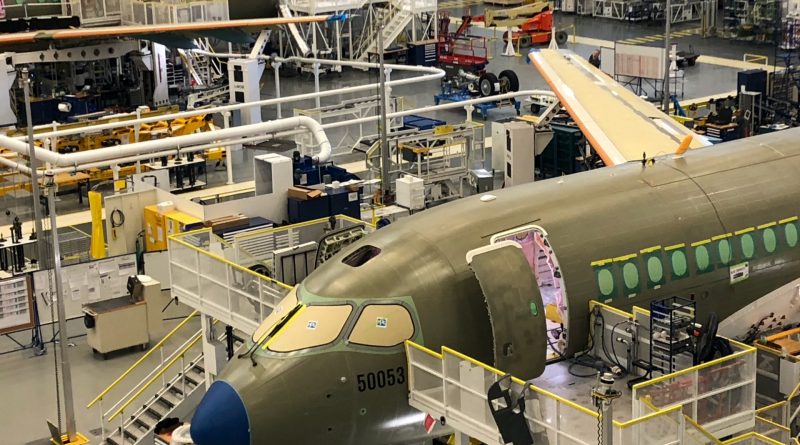 Airbus invited some trade media yesterday in Mirabel to review the A220 program.

In May, Airbus announced an increase in the maximum take-off weight of 5,000 pounds and the 450 nm range. The maximum wright with zero fuel and the maximum landing weight will be increased by 4,000 pounds as well. These two increases allow for a higher payload. These latest weight increases will be available in early 2022.

One of the recurring problems with the A220 was the fragility of the luggage bin compartments and the interior panels. These elements have been improved to make them more resistant. This slightly increased the aircraft weight but the reliability gain was worth it. The first airline to receive the new cabin was Delta, which his satisfied.

As of October 31st, 325 Level C check and 5 Level D check have been completed on A220s. The data obtained makes it possible to extend the time between checks: the A check will be at every 1000 hours rather than 850 hours. The C check is increase from 8,500 to 10,000 hours. Major structural check will now be at 12 years.

The production of the CRJ is expected to end at the end of 2020; as soon as the space is cleared, Airbus will begin to install the pre-FAL in the building that Airbus employees call 801. It should be completed by the end of 2021.

As the picture shows, this is where the various elements and systems will be received. This is where the quality checks and the last assemblies of the subassemblies will be made. The integration of some systems that is currently done on the assembly line will be transferred. The initial capacity of this pre-FAL will be fourteen devices per month: 10 for Mirabel and 4 for Mobile.

Position 1, which is on the right on the picture, will be modified in order to assemble 14 fuselage per month. Those of Mobile will be shipped after this step.

Some of the central fuselage sections still come from the Bombardier plant in Ireland. The goal is always that AVIC becomes the sole supplier of fuselage center sections.

Avianor is still a partner for finishing the A220s but Airbus specifies that this help is temporary. It is not possible to know how much A220 will be transferred in 2020 for interior finishing. But it has been pointed out that this agreement is temporary.

After installing two domes for the pre-flight section, a third shed was built. This is where the delivery ceremony of the 100th A220 took place.

At the time of our visit, serial numbers 50053 and 55081 were at station two. Taking into account the latest deliveries there were a total of 24 A220s at different assembly stages.