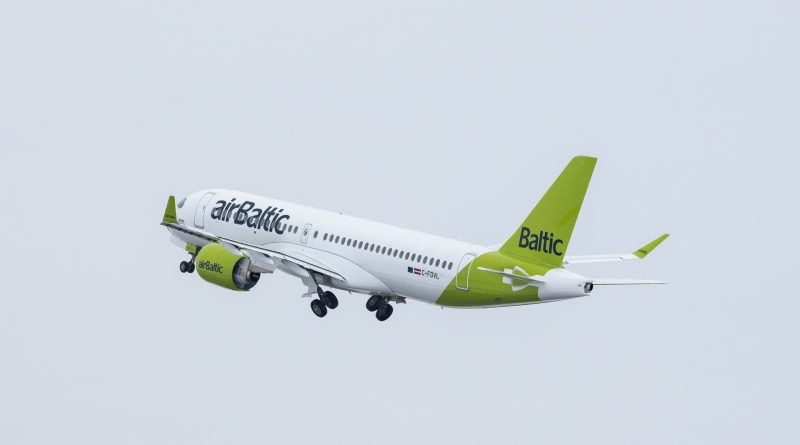 In January 2012, Air Baltic had just gone through a painful financial restructuring. Its president and CEO, Martin Gauss, had been in office for barely a year. He was aware that the long-term viability of the company was through the renewal of the B737 fleet. The ten B737-300 Classic were configured to carry 144 passengers in one class. Their range was around 2100 nm.

Four types of aircraft were available at the time: the A319NEO, the B737MAX7, the A220-300 (Bombardier CS300) and the Embraer E-195. Because it was too small and its range was too short, the E-190 was eliminated quickly. The A220-300 was different from the other two options for two reasons: It could carry almost the same number of passengers as the B737-300 but in two classes rather than one. But it was mainly the fact that his weight was at least 5 tons less than it gave him a huge advantage. The A319NEO and the B737MAX7 were therefore disqualified because of their excess weight.

The range of the A220-330 was lower than those of its two competitors, but sufficient for the needs of Air Baltic. Mr. Gauss was particularly impressed by the innovations that the C Series brought. Although it was a new aircraft program, he was willing to take the risk. Mr. Gauss was convinced that this bet would give him a leg up on the competition.

At the Farnborough Air Show in July 2012, Air Baltic signed a first letter of intent for 10 CS300s. The agreement also included purchase rights for ten more aircraft. Then, on December 20, 2012, the letter of intent became a firm order.

In order to finance the aircraft, Air Baltic has launched a tenders from leasing companies. The response of the lessors was then very disappointing; at that time, the viability of the program was not garanteed. Leasing companies feared that aircraft would depreciate quickly after they were commissioned.

For the first eight A220-300s, Air Baltic was therefore forced to resort to traditional financing. But the arrival of Airbus on the A220 program has completely changed the situation with the leasing companies. For the acquisition of aircraft 21 to 25, Air Baltic has received a dozen highly competitive offers. For leasing companies, the name Airbus is a guarantee of longevity. It is now possible to establish the residual value with greater certainty.

Latvia is a small country in the Baltic Sea with a population of 1.9 million. The largest region of Riga, its capital, has 900,000 inhabitants. The possibilities of expansion are not infinite, so it is important to make good market analyzes.

The choice of the A220 allows Air Baltic to stand out from other airlines. The Latvian company likes to define itself as a hybrid carrier between a Legacy carriers and a LCC; Air Baltic offers 12 business class seats that include the full range of services. The rear of the planes is configured with 133 seats all in basic economy. In this section the basic price includes only the ticket, you have to pay extra for the rest: seat selection, checked baggage, meals, drinks etc.

The Latvian carrier has placed new orders for A220 twice since 2012. It now has 50 firm orders. Air Baltic has just taken possession of its 21st A220-300. In 2020 it will dispose of its last four B737, then it will gradually replace its 12 Q400. The first 40 A220-300s are used primarily to increase capacity and frequencies on existing roads. The next 10 will be used for expansion from Latvia.

Air Baltic also has options for 30 more A220-300s. If the company decides to exercise them, it will be to base the aircrafts elsewhere in Europe. The plan is to expand outside Latvia. Martin Gauss was wrongly quoted in the pass, there is no intention of launching a new discount carrier.

Entry into service and operation

From December 2014 to November 2016, Mr. Gauss says he spent almost more time in Mirabel than in Riga. He therefore closely followed the completion of the flight tests and the entry into service of the A220-100 with SWISS. He also followed very closely the assembly of the first Air Baltic aircraft.

On November 28, 2016, Air Baltic took possession of its first A220-300. Since then, the aircraft’s performance has always been better than promised. We did not get the dispatch reliability rate of Air Baltic A220-300s, but the reliability rate of the fleet is 99.6%. Aside from replacing the engines earlier than expected, Air Baltic did not experience any serious trouble. It boasts of being the best on time European airline.

Mr. Gauss hoped that the passengers respond would be positive, but he said it exceeded his expectations. Air Baltic has conducted a number of customer satisfaction surveys, and the most important thing is that as soon as they board, passengers are surprised by the brightness, space and storage of the A220. In short, passengers are conquered even before they have buckled up. The passenger satisfaction with the A220 has lowered the satisfaction rate of other aircraft in the fleet.

Air Baltic employees quickly adopted the newcomer, especially the aircrew. Employees find it quieter, brighter and the air is of better quality.

Since the integration of the A220 into its fleet, Air Baltic is growing and is profitable. MR. Gauss credits the A220-300 for many of Air Baltic’s successes.

In 2017, Air Baltic had to order new aircrafts to meet its growing needs. The company then re-evaluated the options available. A220 and E2 were selected for final analysis. Over short distances, the performance and economic performance of the E2-195 are approaching the A220-300. But for flights of 4 to 6 hours, the runway performance of the E-2 reduces its payload. The economic efficiency of E2-195 on these roads is then significantly lower than that of the A220-300.

The operational constraints of E2-195 therefore limited it to part of the Air Baltic network. For an airline of this size, it is more cost-effective to be able to use all of its aircraft across the network. Its low cost of operation and its greater range make the A220-300 more versatile. It was the flexibility of the A220-300 that played in its favor.

As the destination map shows, all Air Baltic connections are less than 6 hours. Except for Abu Dhabi which is 6 hours 10 minutes. The current performance of the A220-300 meets all the needs of Air Baltic. The company has therefore not asked Airbus for another increase of the A220-300range. Mr. Gauss does not see any interest either for the development of the A220-500. But if ever, Airbus decides to go ahead with the 500, Air Baltic will evaluate it at that time.

Mr. Gauss opinion is that the limit has been reached with the gas turbines with a gearbox for the fan. He believes that the next type of aircraft that Air Baltic will buy will have hybrid-propulsion.

Epilogue about Martin Gauss and the A220

Mr. Gauss’ fervor and passion for the A220 is exceptional, especially from a CEO of an airline. In 2012, Mr. Gauss took a bold gamble and he did not just wait. He putes a lot of time and energy to promote the A220. We can think that at first, by helping to sell the A220 he helped himself. But he continues to do so with as much energy as the survival of the program is assured.

This fall, Mr. Gauss lent Airbus an A220-300 for a promotional tour of the Pacific. As if that was not enough, he participated in this two-week tour. Martin Gauss is more than just a good customer for the A220, “he’s a champion customer”. His dedication to promoting it deserves to be highlighted.

We add a short video of Mr. Gauss demonstrating the qualities of the A220. Sorry but I was too close to Mr. Gauss during his demonstration and I missed some.

Martin Gauss introducing the A220 cabin

We conclude on this anecdote: after the delivery ceremony of November 28, Mr. Gauss is alone. I approach him at the same time as two Airbus employees in Mirabel. The two men in their forties address Mr. Gauss; “Thank you Mr. Gauss for being such a good ambassador for our plane!” Somewhat surprised, Mr. Gauss pulled himself together and answered “thank you for making such a good plane”