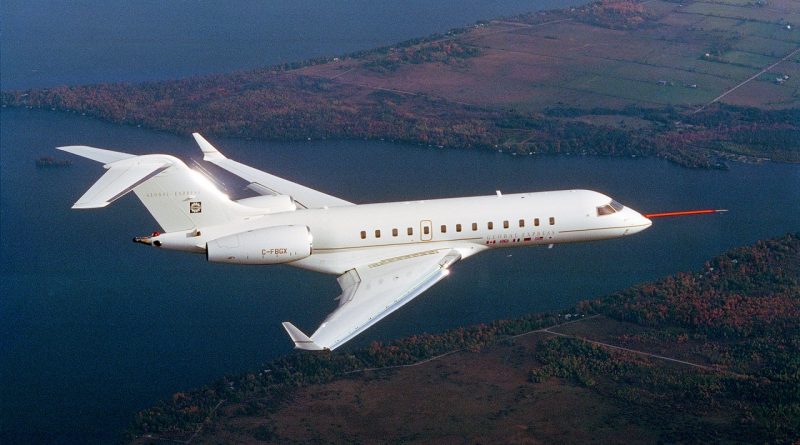 The Global Express made its maiden flight at Downsview Airport on October 13, 1996. To mark this anniversary, Wings Over Québec is publishing 4 texts about this industrial and commercial success.

The Launch of the Production

Bombardier officially launched the Global Express program at the end of 1993. The estimated development cost is between $800 million and $1 billion and the first flight is scheduled for 1995. In order to reduce the risks, the manufacturer is making deals with partners whose contribution will reach 50% of the costs: BMW-Rolls Royce will supply the BR-710 engine while Mitsubishi Heavy Industries will take care of the wing. Messier-Dowty is also participating in the program with the landing gear. Honeywell supplies the Primus avionics suite which has six CRT screens in the cockpit. The aircraft will also be equipped with a head-up vision system.

By early 1994, a team of 200 people were busy designing and defining the program. Engineers from the various partners are also part of this Montreal-based team. During the year, other major suppliers were selected including: Sextant (Thales) for flight controls. Bombardier has ruled out electric flight controls because of the cost and customer reluctance. With the Global Express, the choice of suppliers has a direct influence on the definition of the aircraft. Suppliers design their own components and systems which are then integrated. Bombardier decides to use CATIA design and modelling software to facilitate the integration.

The Global Express is the first aircraft fully developed under Bombardier’s leadership. Its aeronautical subsidiaries will mainly take care of the fuselage, structure, assembly and interior finishing. The Canadair division will take care of the cockpit and some structural elements. Short obtains the mandate to manufacture the front fuselage, nacelles and stabilizers. De Havilland takes care of the forward fuselage, vertical stabilizer and assembly at Downsview.

At the beginning, interior finishing was done at several sites, including those in Wichita and Dorval. But over time, the Global Express Montreal finishing Centre will take care of almost all of the devices.

Although he does share a few basics with the Challenger 601, the Global Express is a completely different aircraft. It can fly at 51,000 feet, it is faster and very efficient. In consultations with prospective customers, many have complained about the unreliability of business jets. Bombardier takes note and targets a reliability rate of 99.5% for the Global Express. It was therefore developed with a minimum of components while ensuring that a simple failure does not cause the flight to be postponed.

For certification, Bombardier uses the principles of the Extended-range Twin-engine Operation Perfomance Standard (ETOPS). This standard applies to commercial passenger jets. From a marketing point of view, it helps reassure customers as it provides additional security. From a technical point of view, this requires the use of computers capable of identifying and isolating a failure in flight. The Global Express is therefore the first business aircraft to use so much electronics.

The wing design of the Global Express poses some unique challenges: in order to fly quickly and far, it must generate little drag when cruising. But when it comes to landing, it must have a lot of lift. In addition, it is very flexible which allows better absorption of turbulence in flight. The development of this wing is one of the great successes of the Global Express program.

When it entered service, it was the largest of the business aircraft and set a new benchmark. click here to watch our most recent video on YouTube