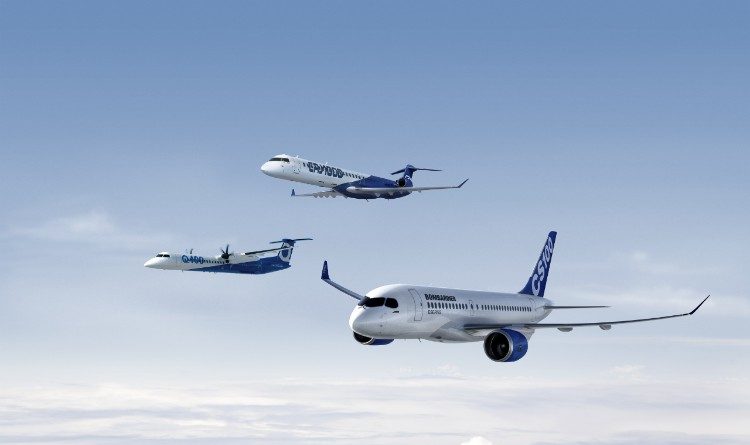 By early 2015, the risks of each of Bombardier’s new aircraft development projects were adding up to the point where the company was in a precarious position; when he joined Bombardier in February 2015, Alain Bellemare inherited a shaky business.

From his first speeches, Mr. Bellemare clearly identified Bombardier’s excessive exposure to risk and did not rule out any solution to bring Bombardier back to an acceptable area. In November 2015, Mr Bellemare and the other members of Bombardier’s executive board presented investors with a five-year turnaround plan to drive the company on a path to profitability. Since this November 2015 presentation, the company has achieved all of its objectives; quarter after quarter. The only downside is the $ 600 million lower cash flow than forecast in the third quarter of 2018. The impact of this temporary shortfall on the business raises the fragility of Bombardier’s finances witch is not out of trouble yet.

Of the three aerospace divisions of Bombardier, commercial aircraft is the least efficient while it has not generated any profit in recent years. The launch of the C Series production was not the only negative factor to have weighed on the finances of this division while the Q400 was produced at a loss.

To explain the lack of profitability of the commercial aircraft division, we must look at the price war that has been engaged Airbus and Boeing for more than a decade. The 50% discounts on the list price granted to airlines have now become the norm rather than the exception; when low interest rates are added at low prices, this has allowed airlines to significantly reduce the capital costs associated with the acquisition of aircraft. The result of this price war is that airlines are now addicted to the discounts they absolutely need to stay competitive in the face of stiff competition.

The three smaller manufacturers, ATR, Bombardier and Embraer had no choice but to follow this price war to get orders. But since the latter did not have the same production volumes as the two giants, their buying and negotiating power with the suppliers being lower, this affected their profit margin, which melted like snow in the sun.

After the order of 75 C Series placed by Delta Airlines in April 2016, all hopes were allowed and analysts expected sales to increase. But in the summer of 2017, Bombardier did not get one more firm order for the C Series. It was not that the airlines were not interested in it, but the price they were willing to pay was a problem. The original C Series business plan was developed long before the sale price of commercial aircraft dropped to this level. In the summer of 2017, it became increasingly clear that the profitability of this program would be difficult to achieve, or impossible. Added to this is the 300% countervailing duty imposed by the US government and one can understand the decision to give a majority stake in the C Series to Airbus.

after the signing of the historic agreement in October 2017. To boost the order book, Airbus did not hesitate to make generous discounts to JetBlue and Moxie; the majority of the losses on these aircraft will be assumed by Airbus and no longer by Bombardier.

The case of the Q400 is a bit more complex as the latest 90-passenger version seemed to attract buyers as sales gradually picked up. But again these sales were obtained with great discounts making the performance of this program questionable. In addition, the sale of the land where the Q400 assembly line is located involved an investment of $ 200M to $ 300M to relocate this 20-year-old aircraft program. To invest such a sum in the Q400 whose profitability is uncertain represented too much risk. In these circumstances, Longview’s offer of $ 300 million for the acquisition of all remaining De Havilland Canada manufacturing licenses appears to us to be an excellent offer and accepting it was the right thing to do for Bombardier. In the end, this sale will have a positive impact of $ 500 million to $ 600 million on Bombardier’s finances; never Q400 would have been able to generate so much profit over the next ten years.

Now remains the fate of the CRJ to be determined. If this program could still generate profits when Bombardier Commercial Aircraft had more than one program, the situation has changed as the CRJ must now absorb all the fixed costs related to production, marketing and after-sales service. The survival of this aircraft program therefore goes through an in-depth review of the organization of Bombardier Commercial Aircraft which will have to adjust its structure to the new reality. A reorganization of the production and the tools is also in the collimator of the leaders of this division.

A CRJ supplier told us that it had been approached by Bombardier to reduce its prices. We also know that updating the avionics suite is one of the changes that could be made to the CRJ; after Rockwell Collin made an offer, Garmin would have made a very attractive one that would be very appealing to the management of Bombardier Commercial Aircraft.

The CRJ is therefore in intensive care for the coming months and we will say that its condition is worrying, but stable for the moment.

Tomorrow we talk about the business jet division.