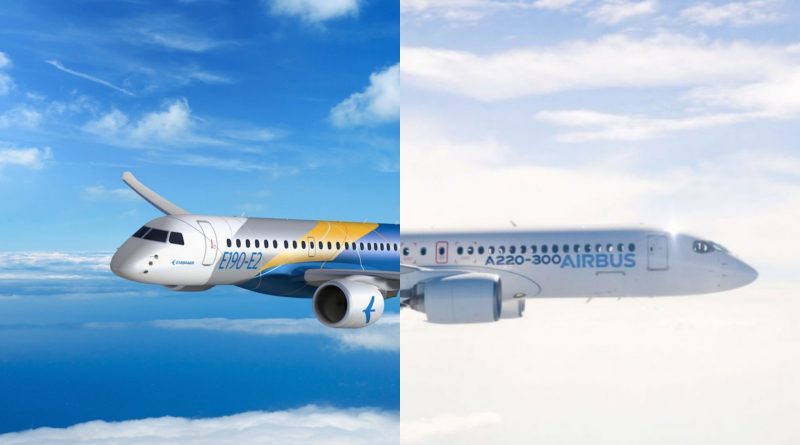 As the MAX crisis rages, we are looking at the Airbus A220 and Embraer E2 programs.

The arrival of Airbus

Airbus uses bundled orders to place the A220 among several customers: when an airline shop for single-aisle aircraft it seeks to meet all its needs in this segment. Airbus can then pair A220s with A320NEOs or A321NEOs to meet customer needs. As the profit margin is higher on the A320NEO family, Airbus can offer bigger discounts on these models in order to get the order. It protects the selling price and the profit margin of the A220. For the buyer, what really matters is the price paid for the total order.

The advantage of being first

From July 2018 to January 2020, Airbus and the A220 faced Embraer and E2. The Brazilian manufacturer is obviously not fit for the confrontation as shown by last 12 months sales of E2 : Embraer has obtained only 20% of orders for aircraft from 100 to 150 passengers with 45 E2 sold. It will be in January 2020 that Boeing take control of E2 to face Airbus. Meanwhile, the A220 has taken a considerable lead with 551 firm orders against 175 for E2.

The A220 program as gained momentum and Airbus will continue to build its order book.

The arrival of Boeing

Negotiations between Boeing and Embraer began in December 2017; Boeing will take control of the E2 in January 2020. Normally, Boeing could be expected to win several orders for E2 in Farnborough in July 2020. But with the MAX crisis, Boeing won’t pay as much attention as it should to E2 sales.

While this transaction was fully justified in December 2017, Boeing’s situation has evolved since. Her finances have deteriorated considerably since, the slightest additional delay with the MAX will cost a fortune. In this context, we can question the utility for Boeing to spend $ 4.2 billion for E2. This aircraft program has already been stretched to its maximum and could not serve as a replacement for the MAX.

In theory, Boeing can do like Airbus and sell E2 in bundled orders. But the reality is that the B737MAX has lost much of its value lately. To successfully win an order, Boeing will have to make generous discounts not only on the MAX but on the E2 as well. The acquisition cost of E2 is $ 4.2 billion with anemic sales. In order to give momentum to the program, Boeing will have to sell several years of production well below cost. Boeing has already done it for its own products assembled in the United States, but for planes assembled in Brazil?

So, what will be E2’s situation in two years from now?