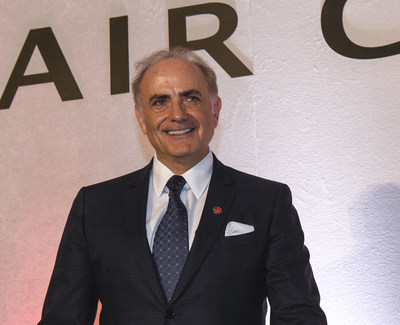 It was in 1988 that Calin Revinescu had his first contact with Air Canada. He was acting as legal counsel at the time of its privatisation. Then he intervened in the hostile takeover by ONEX and later in the merger with Canadian Airlines. In 2003, he was appointed as General Vice President – Corporate Growth and Strategy. He subsequently held the job of Head of Restructuring. Ii is n 2009 that Calin Rovinescu took the leadership of Air Canada.

The first decade of the 21st century was very difficult for Air Canada with bankruptcy in 2003. The company was facing financial difficulties again in 2008 as it almost when bankruptcy.

When Calin Rovinescu took over as Air Canada manager in 2009, he decided the company had to change in order to survive. One of Air Canada’s biggest problems at this time is that its employees still have a crown corporation mentality. The company was not efficient and could not withstand international competition. It was in 2014 that the company signed its first 10-year collective agreement with its pilots. With this agreement Air Canada obtained much more flexibility to reduce its operating costs. In return, Air Canada gives to its pilots a profit sharing program.

After this agreement, pilot’s mentality changed and they begin to worry about the profitability of their company. Subsequently, other groups of Air Canada unionized employees also signed long-term agreements. At the end of 2019, Air Canada had long term agreement with 24,000 unionized workers.

However, we cannot ignore the sad episode of the closure of AVEOS and the 1,300 jobs lost. Calin Rovinescu is a determined and persistent man when it comes to achieving his goals. He also has a tendency to overreact when faced with strong opposition. He therefore went all the way in his confrontation with the former Air Canada maintenance employees transferred to AVEOS. The way in which Air Canada’s relationship with its former union members ended is a stain on its record.

Under Calin Rovinescu, Air Canada embarked on a major program of expansion and growth. The cornerstone of this strategy is to have passengers entering and leaving the United States to transit through a Canadian hub. Combined with a better cost structure, this strategy has obtained excellent results. In 2009, Air Canada revenues were $ 8.5 billion with a loss of $ 769 million. 11 years later, Air Canada’s revenues reached $ 19.1 billion with profits of $ 3.6 billion in 2019. Mr Rovinescu has reinstated Montreal in Air Canada’s growth plans.

In recent years, Calin Rovinescu and Air Canada have won several distinctions and merits. The Canadian flag carrier has grown into an extremely profitable company that is highly regarded by business customers. The Canadian company is now a major player in the transatlantic market. The context of COVID-19 gives even more importance to its strategic acquisition of the Transat A.T.