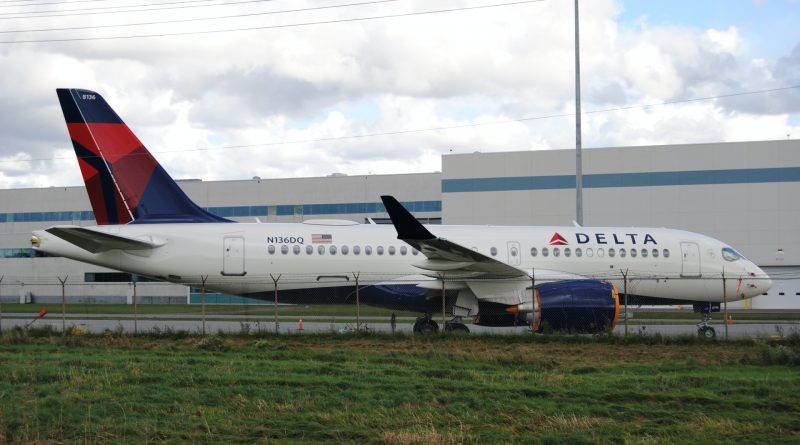 Delta Airlines released its third quarter results last week and the numbers are very bad. But that did not surprise anyone despite a $ 5 billion deficit for the period. It should be remembered that Delta Airlines had refused aid from the US government’s first support program. Therefore, the air carrier’s situation is not worse than that of its American competitors.

Delta Airlines says it has reached an agreement with Airbus to delay deliveries of new aircraft. In fact, the company mentions that the agreement will allow it to reduce its acquisition costs for new aircraft by $ 2 billion for 2020 and $ 5 billion until 2022. But the press release does not give any details on the number of delivery deferrals and types of aircraft.

The situation in Mirabel

La Presse as mentioned that there is a traffic jam at the exit of the Airbus assembly line in Mirabel. Delta Airlines is the main cause, as since mid-March the airline has not accepted any A220s. In addition, the company still has four CRJ-900s on order.

In fact, Ms. Annabelle Duchesne of Airbus Canada confirms that there will be 48 layoffs in Mirabel next December:

“These colleagues provided support services, such as aircraft logistics, maintenance and painting, for the CRJ Program. We initially planned to transfer them to A220 activities which were then ramping up – after production of the CRJ ceased at the end of the year. Now, given the impact of the pandemic which is particularly hitting the airline industry, we cannot do it. “

Ms. Duchesne also mentions that the production rate of the A220 is still at three per month. Asked if Airbus Canada still plans to upgrade to four A220s per month, Ms. Duchesne remained more vague:

“We continue to monitor the market very closely. “

We must therefore dig through all the information available to understand if Delta will take A220s in 2021.

As of September 30, Delta had a total of 226 Airbus aircraft on order. Based on list price, these orders would be worth $ 33 billion. Note that Airbus no longer publishes a price list of its aircraft because it was no longer representative of the price paid by airlines. By my own estimate, the value of the 226 aircraft on order would be more like $ 12.39 billion. Here is the breakdown of orders with the price paid by Delta Airlines.

The table shows how much the A220 occupies only a small portion of the value of aircraft on order. In fact, the A220 is only 15% of the total amount. With the pandemic continuing to rage, the last sector to recover the best is international flights. So it is obvious that the airline does not need more big planes like the A330-900. In 2018, the airline had already announced a postponement of A350 deliveries beyond 2025. The deliveries of A321ceo and neo alone represent a value of 2.4 billion USD for 2020-21-22. If we add 14 A330-900s we arrive at 4.5 billion USD. The A220s not delivered in 2020 represent a value of approximately 460 million USD.

You will also notice the very low price Delta Airlines paid for its A220s. This figure is based on several pieces of information circulating in the world of aviation. The objective for the air carrier is therefore to find a company that will lease it at an advantageous rate.

In addition, Delta Airlines negotiated an agreement with its pilots before the A220 entered service. The salary of A220 pilots is therefore the lowest within the airline. Add to that that its other operating costs are very low and you have a big argument in favor of the A220.

What gets wrong with Delta

In early September, Delta Airlines announced significant layoffs including 1,941 pilots; When they join an airline, pilots start with the smallest aircraft in the fleet. As the A220 is the smallest aircraft in Delta’s fleet, its pilots have the least seniority. In order to respect the seniority rules, the most junior pilots must be laid off. Delta was therefore forced to lay off many of the A220 pilots. Since it takes about two months to train pilots that have more seniority, the airline is running out of pilots on the A220. At the beginning of October, Delta temporarily stored some A220s will training more senior pilots on type. We will have to wait until December or even January before a return to normal.

Finally, Delta’s CEO, Mr. Ed Bastian, confirmed that he is negotiating a special agreement with the pilots: this is to allow the company to keep 1,700 junior pilots on the job rather than laying them off. Here is Mr. Bastian’s exact statement on this:

“We are not going to talk about negotiations publicly. But what I can tell you is that the focus is trying to find a way to eliminate the need to furlough 1,700 junior pilots, and we have given the alpha, the union a lot of different options. And I am hopeful we can reach resolution, but I am not trying to suggest or forecast that. “

If the company reaches an agreement with the pilots’ union, it will then be able to keep all of its junior pilots. If the agreement is signed quickly it would also reduce training costs on the A220 in 2021.

I conclude that Delta Airlines should start taking A220s again in January or February.